The lovable Labrador – a dog with a heart of gold. He loves everyone, and everything (especially water!).

Labrador Retriever history: What were Labradors originally bred for?

The history of the Labrador Retriever traces back over 400 years to the what is now known as Newfoundland and Labrador, an Eastern province of Canada. With a thriving fishing industry, local fisherman enjoyed the assistance of two types of dogs – the Newfoundland and the Lesser Newfoundland, also known as the St John’s Water Dog. Due to their shorter, water-resistant coat, and compact, athletic build, the Lesser Newfoundland quickly gained favour. Fisherman soon began bringing them along on their trips, in which the dogs would happily dive into the water, grab hold of the end of the nets, and swim back to shore with the fresh catch – sometimes in sub-freezing temperatures.

The Lesser Newfoundlands proved to be exceptional swimmers. This trait, along with powerful jaws, endless stamina and kind, eager disposition soon caught the attention of English sportsmen who sought an ideal hunting companion. Around 1830 the first group of Lesser Newfoundlands were exported to England. Once there, experienced hunters and gamekeepers began mating their new prospects with other gundog breeds in order to heighten the innate hunting and retrieving tendencies.

By the late 1800s, the Lesser Newfoundland adopted a new name – the Labrador Retriever. Labradors were a dying breed in their native Newfoundland, due to prohibitive tax policies and quarantine laws, but at the turn of the 20th century, Labradors began being exported back to North America. 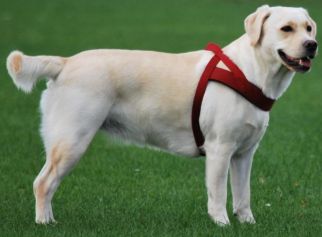 Labradors are a powerful, medium-sized, breed of sporting dog with a broad head, deep chest and short, dense coat. Almost everything about the Labrador Retriever structure allows optimal performance for hunting on both land and water. Their tails are wide at the base and taper towards the tip, acting like a rudder. Their toes are webbed like an otter’s and their outer coat is resistant to moisture.

The Labrador temperament can bring a smile to anyone’s face. They are well-known for being kind, social and eager-to-please. They can be slow to mature, and many remain puppy-like even when fully grown.

Labradors thrive on attention and are known for being easy to train, due to their tractable nature and love of toys and food. Generally considered to be sensitive dogs, fair, force-free methods of training such as positive reinforcement are heavily advised. Furthermore, intimidation and punishment-based methods are often over-the-top for a breed who’s so motivated to please its owner. 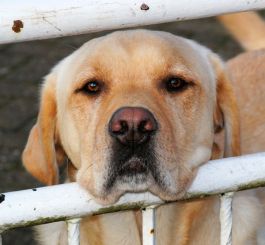 Visitors will be met with a warm welcome

Labradors make outstanding family dogs, showing tremendous patience and tolerance for children and are often used for therapy work. Young Labradors can be boisterous, however, and may accidentally knock over young toddlers. Supervision around children is always recommended, regardless of breed.

Surprisingly, Labradors can make great watchdogs. It’s common for them to give off a woof or two, to let you know someone’s arrived. Labradors are especially known for their friendliness toward strangers, however, so anyone who enters will generally be met with a warm welcome. Labs tend to get along well with other pets, including the family cat, and strange dogs. Training may be required however to prevent them from ‘retrieving’ chickens and other small pets.

Labradors are a high energy breed, especially when young, requiring vigorous daily exercise. A brisk walk of an hour or more per day is recommended for adults, as well as plenty of play and mental stimulation in between. More may be needed for younger adults, as they’re known to be energetic and destructive when understimulated. Hard exercise should be avoided in very young Labradors until they have finished growing, however, to prevent issues with joints later on. The coat itself is short, dense and double-layered. The outer coat is straight and coarse, while the undercoat is soft and interwoven, acting as protection against extreme temperatures.

The Labrador’s short coat is generally low maintenance. Brush once or twice per week with a slicker brush to minimise the impact of shedding, and keep your Labrador looking sharp. You may need to increase this to daily during the heavy shedding season.

Rinse our their coat after a swim to remove any salt, dirt or chlorine. In addition, ensure that your Labrador’s ears are properly dried to prevent ear infections.

While generally a hardy breed, Labrador Retrievers are known to suffer from a few conditions, including:

Many diseases faced by Labradors are inherited, and therefore avoidable. By choosing a breeder who conducts relevant screenings and health clearances, and only breeds physically and temperamentally sound Labrador Retrievers, you are dramatically improving your chances of having a strong, happy, healthy Labrador of your own. 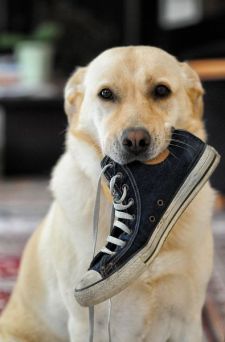 What is it like to live with a Labrador Retriever?

Do not underestimate the exercise requirements of a Labrador. They can require upwards of one to two hours of physical activity daily, especially when young.

One of the hallmarks of the Labrador Retriever is its soft mouth, a feature in many sporting breeds, which allows them to retrieve downed fowl without damaging the carcass by the time they’ve returned to the hunter.

As another throwback to their hunting ancestry, many Labradors love playing fetch and carrying random objects in their mouths. On the other hand, they are known to exhibit destructive chewing when understimulated.

It’s not unheard of for a Labrador to pull a disappearing act, only to be found again in the nearest body of water. To prevent this, ensure you have good fencing and a solid recall cue.

While aggression should be rare in Labrador Retrievers, it is no longer uncommon due to indescriminant breeding practices. Care should be taken when selecting a breeder. If opting for a rescue, ensure thorough temperament testing has been conducted.

Labradors are known to be gluttons, so hide the treats, and watch your plate!

English Labradors often have lighter hues in their coats, as well as heavier bone structure and shorter limbs. Their appearance is considered to be more stocky. English Labradors are often calmer, but more prone to obesity. These tend to be the bloodlines seen in other commonwealth nations such as South Africa, Australia and New Zealand.

The American Labrador tends to be taller, lankier and lighter in bone structure, to better suit the terrain and ideals of the hunter.

Like English Labs, Show-line Labradors tend to have heavier bone structure than field-bred Labradors, as well as calmer temperaments and lower energy. Their heads are broader, and necks stronger. Their appearance is intended to closely match the Labrador breed standard.

Why are Labradors called Labradors? Buying a Labrador from a breeder

If you’d like to get a purebred Labrador as a puppy, be sure to look only at reputable breeders who care for the welfare of their puppies. You can determine whether a breeder is reputable by observing whether they go through the effort of health testing their breeding stock for hereditary conditions like those above, and only breed dogs who are physically healthy, and emotionally sound. They should also be involved in particular avenues with their dogs – be it conformation, hunting, obedience, service, therapy, or any other activity that showcases their dogs’ temperament and suitability for work and breeding.

As one of the most popular breeds around, Labradors are not hard to find in rescues and shelters. If you would like to adopt a Labrador in need of a new home, search for Labrador Retriever rescue organisations in your area. Alternatively, you could take a look at pet-rehoming websites like Petfinder.