What do gambling, complimenting a loved one and teaching a dog to sit all have in common? That’s right, operant conditioning! Operant conditioning forms the backbone of every advanced dog training programme – from police K9s to world-class agility dogs, right down to teaching your dog to ‘shake’. So what is operant conditioning, and why is it so essential to understand its concepts if you own dogs?

What is operant conditioning? To put it simply, the animal makes a connection between one thing/event, and another. For example, heat (stimulus) from a stove plate can cause pain if you touch it, and the smell (stimulus) of a delicious meal usually means yummy food incoming.

Unlike what’s seen in classical conditioning, the operant behaviour is entirely voluntary.

Operant conditioning uses consequences to influence the occurrence and intensity of behaviours.

How was operant conditioning discovered?

B.F Skinner (1904-1990), known as the father of operant conditioning, conducted many experiments on animals like pigeons and rats in his infamous ‘Skinner Box’. These boxes contained puzzles of sorts, and his team would record behaviours and response rates to particular stimuli. What were the findings?

From their experiments, Skinner and his colleagues noticed that depending on the nature of the stimulus, and the schedule of reward, you could influence the rate of learning, and even shape complex behaviours in animals purely through reinforcement or punishment.

Every behaviour results in consequence and these consequences go on to influence how likely the animal is to perform the behaviour again.

In operant conditioning, the terms positive and negative have nothing to do with good and bad, nice and mean, or pleasant and unpleasant. If something is described as positive, this simply means that something has been supplied, or added to the mix. In contrast, negative means that something has been taken away. Think of it as a simple mathematical formula. Positive means you’re adding (+) to the equation and negative means you’re subtracting (-). 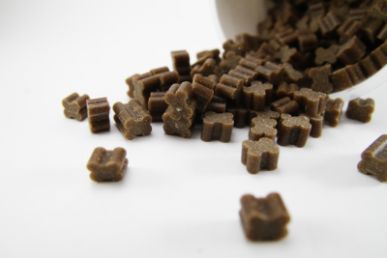 Reinforcers have to be perceived as rewarding by the subject in order to increase a behaviour’s likelihood. This sounds obvious enough, but it is easily forgotten at crunch time. Just because we think something should be reinforcing, doesn’t mean it is, so know your subject well.

As the phrase implies, positive reinforcement involves giving or applying something to the animal, to increase the occurrence of a particular behaviour.

An example of positive reinforcement would be petting your cat when she hops up to join you on the sofa. You’re supplying affection (which your cat perceives as a good thing – perhaps it was even what she wanted in the first place!), which reinforces the behaviour of jumping onto the couch, making it more likely to happen again.

Negative reinforcement involves taking something away (usually an aversive stimulus), in order increase the likelihood of a particular behaviour reoccurring.  Sound confusing? Don’t worry, almost everyone trips up on this one.

In old school dog training, an example of negative reinforcement would be removing pressure on the throat and neck from their choke chain when they performed a proper sit or heel. By taking away the aversive stimulus (the tight choke collar) when the dog sat, the handler increased the likelihood of their dog performing the sit, as a way to avoid discomfort.

A less cruel, and more modern example would be this simple feature in some cars, which a few of you may have experienced: If you forget to put on your seat belt once the car has started, an alarm beeps and persists until you clip on your belt. To many people, this sound is annoying, so to avoid having to hear the beeping for too long, you hastily put on your seat belt. In addition, to prevent it happening again, you often ensure your belt is securely in place before the car turns on next time. The alarm is an aversive stimulus that is taken away to reinforce the behaviour of putting on your seat belt. As with reinforcement, the subject actually has to perceive the consequence as undesirable in order to decrease the likelihood and occurrence of the behaviour. While we might see something as punishment, it may be taken differently by the subject.

An example of positive punishment would be spraying water on your cat when she jumps on the dining room table. You apply water (a stimulus that cats are aversive to) as she performs the behaviour to decreasing the likelihood of it happening again.

Negative punishment, funnily enough, is not as nasty as it sounds. You simply take something away (usually desirable to the animal), to penalise a particular behaviour, discouraging them from doing it again.

An example of negative punishment is the simple act of turning your back when your dog jumps on you. By turning around and ignoring your dog, you remove any attention (which he wants) to discourage him jumping up in future. The same strategy is seen in parenting: if a child misbehaves, the parent may take away something of value (console, phone, bedroom door) to punish the behaviour.

Punishment is often the first thing people reach for when it comes to behaviour modification – positive punishment in particular. While positive punishment can be highly effective under the right circumstances (if used by someone who knows what they’re doing), it can also lead to unintended outcomes. A major drawback to using punishment is that it teaches the subject what not to do, instead of what to do. As a result, behaviour becomes suppressed. The animal may stop expressing the behaviour for a while, but that doesn’t mean the root issue has been solved.

A tragic example is seen in dogs who have been punished for growling. The owner doesn’t want to promote aggressive behaviour, so they punish their dog every time they growl (a warning sign in dog language that they’ll bite if pushed). This seems straightforward enough, but often what the dog actually learns is not to growl, even when they’re feeling threatened or uncomfortable. One day the dog attacks “out of nowhere” (sound familiar?). In these circumstances, punishing the growling did not make the dog any less aggressive, it merely taught them to hide what they were feeling, allowing them to lash out unpredictably. In addition, if used incorrectly, positive punishment, in particular, can actually lead to increased fear, aggression and superstition, as the animal begins to feel increasingly threatened and distressed.

It’s possible to completely eliminate a behaviour from your pet’s repertoire through the process of extinction. By removing any reinforcement for the behaviour, it stops being rewarding for the animal to do it, and with enough time and consistency, they stop performing the behaviour altogether. This can be tricky to accomplish, however, as behaviours can be self-rewarding. It requires careful management of the environment, and for everyone who interacts with your dog to be on board. Confused? Use this simple grid when you’re stuck

As dogs can’t speak human, they often have no idea what they’re being rewarded or punished for. To be most effective, reinforcement and punishment should happen as soon as the behaviour happens. Within seconds! Too late, and your dog has already moved on, causing you to reward or punish the wrong behaviour.

A typical example is the age-old story of someone coming home from work, only to find that their dog has chewed something up while they were gone. In the dog’s world, that happened aeons ago and has long since been forgotten. But the owner is mad, so she yells in anger. What has the dog learned? Not to chew? No, he’s learned that sometimes his owner comes home mad. So, being the good dog that he is, he tries to appease her by dropping his ears, lowering his head, or lying down submissively. This tends to be taken to be an admission of ‘guilt’ by owners who don’t know any better, and the cycle continues (because the dog still hasn’t learned to chew a suitable toy instead of the remote).

Marker training goes a long way to help bridge the timing gap, and enhance communication between trainers and animals, but that’s a post for another day. Does operant conditioning affect people too?

As you may have figured out by now, humans are absolutely at the whim of operant conditioning, just like any other animal. Almost every interaction we have with other people and our environment can be considered operant behaviour. Skinner himself went to so far as to imply that free will is an illusion, as our own behaviours are often so tightly connected and influenced by external factors. Here are a few simple examples of operant conditioning in our everyday lives:

Further reading and applications of operant conditioning in dog training

Whether we’re aware of it or not, we’re constantly training our dogs. At any given moment we’re rewarding or punishing their behaviour, and as a result, we have to become conscious of our own behaviour, in order to be clear, fair and consistent in how we’re communicating with our beloved pets. There’s a reason the late Dr Sophia Yin, a leading and highly respected veterinary behaviourist, named her top-notch manual How To Behave So Your Dog Behaves.

If your dog is misbehaving, ask yourself two questions

If you would like to learn more, or read up on the science behind operant conditioning, check out the following titles:

Pamela Reid is a certified applied animal behaviourist who breaks down decades of scientific findings into simple English for dog owners interested in learning how to best teach their canine companions. She goes over topics like operant vs classical conditioning, single event learning, factors that affect learning, stimulus control, and how to use aversives correctly. It really is an excellent resource and is often referenced by trainers and dog sports competitors at the top of their game.

Despite what the title suggests, this isn’t actually a dog training book. Don’t Shoot The Dog beautifully explores the world of operant conditioning and how to use it as an effective tool in everyday life. Pryor provides 8 strategies for ending undesirable behaviour in any context – a miserable spouse, an aggressive boss, a naughty child, a noisy dog, ending addiction, improving your tennis game and much more. Having gained her expertise training dolphins, Pryor’s methods are non-aversive and wonderfully fair and actionable.

That’s not all folks!

To keep it brief, we’ve left out a few essential pieces to the operant conditioning puzzle. Be sure to see our posts on Shaping and Schedules of Reinforcement when you can, to get the full picture.