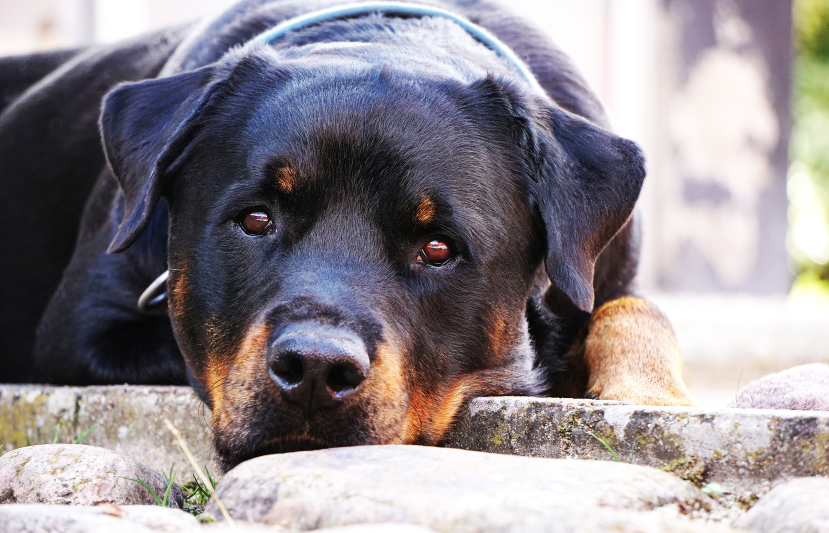 The Rottweiler. He’s a gentle giant and lovable goof, but mess with his family at your own risk!

While there’s little in the way of documentation, Rottweilers are thought to be one of the oldest breeds around, descending from ancient Roman mastiffs. Their original role was to help drive and protect the herds of livestock intended to feed 1st-century Roman soldiers, as well as guard the camps. These working dogs needed to be powerful, rugged and intelligent with strong guarding instincts. It was during this time that the town of Rottweil was founded by the Flavian Dynasty. As Rottweil flourished as a trade centre, the Roman cattle dogs maintained their value by driving livestock to market, pulling heavy carts and protecting their herd and owners from predators and thieves. In time, these dependable working dogs became known as Rottweiler Metzgerhunds –  Rottweil butcher dogs. For nearly 800 years the Rottweiler lived as a working dog – until the abolishment of cattle driving in the 19th century. Having lost their purpose, the Rottweiler population sharply declined and came close to extinction. In the early 1900s, there was only one Rottweiler bitch left in the entirety of Rottweil.

The need for reliable working dogs returned soon returned, however, with the eruption of the first and second world wars. Rottweilers served as guard, draught, emissary and ambulance dogs. In addition, law enforcement found great use in Rottweilers as police dogs.

The Allgemeiner Deutscher Rottweiler Klub (ADRK – General German Rottweiler Club) was established in 1921 as the home club of the Rottweiler breed and maintains this position today. The American Kennel Club officially recognised the Rottweiler in 1931 and popularity slowly increased. In the mid-1990s, Rottweilers were the second most registered dog with the AKC, and have maintained their position in the top 10 in recent years. Rottweilers are a medium-large, powerful breed of working dog easily identified by their defined rust markings on an otherwise black body of hair. They have substantial sized skulls, deep chests and a dense double coat, in addition to broad muzzles, dark eyes and pendant, triangular ears. The Rottweiler expression is invariably noble, alert and self-assured. Their tails may be docked or left natural, depending on the rules of the country in which they reside.

Rottweiler size; How big do Rottweilers get?

In comparison to other breeds, secondary sexual characteristics are notably marked in the Rottweiler. Males are distinctly masculine with larger frames and heavier bone structure, while females are decidedly feminine but not without substance.

As mentioned earlier, Rottweilers can be found with and without docked tails. The practice of tail docking is largely controversial and banned in many countries, including the Rottweiler’s home, Germany.

When left natural, the Rottweiler’s tail hangs while at rest, and over the back when excited.

Well-bred Rottweilers are calm, confident and self-assured. These are tough dogs, but by no means empty-headed. They watch their environments carefully and don’t make decisions hastily.

Rottweilers are renowned for their great trainability and use in working roles such as law enforcement, protection, military and search and rescue. Rottweilers are highly capable students, rendering compulsion-based methods largely unnecessary. Fair, force-free methods of dog training such as those incorporating positive reinforcement are advised, especially for inexperienced owners. Are Rottweilers mean? Are they good with kids?

If raised with children, Rottweilers can make excellent family dogs. They are wonderfully affectionate with their loved ones and naturally protective, making them top-notch guardians. Young Rottweilers can be boisterous, however, and may accidentally knock over young toddlers. Supervision around children is always recommended, regardless of breed.

Rottweilers are naturally suspicious, making them first-rate watchdogs. They require no training in letting you know something’s afoot. To prevent aggression toward non-threatening strangers, Rottweiler owners are urged to socialise and expose their pups to a number of people, sounds, children, animals and other scenarios while they’re young, curious and impressionable. Ensure their experiences are safe and positive, to prevent your dog developing negative associations later on.

Rottweilers tend to get along well with other pets in the home if raised with them, including the family cat, and small dogs. However, Rottweilers can be assertive and pushy with other dogs, instigating scuffles. They are prone to same-sex aggression.

Rottweilers are a medium energy breed, requiring daily exercise. A brisk daily walk, as well as the opportunity to run off-leash and burn off any excess energy, is recommended for adults. In addition, Rottweilers are a thinking breed, who love to be challenged and require mental stimulation.

More exercise may be needed for younger adults, as they’re known to be energetic and destructive when understimulated. Hard exercise should be avoided in young Rotties until they have finished growing, in order to prevent structural issues further down the line.

Like all breeds, without enough physical and mental stimulation, Rottweilers have a tendency to develop behavioural issues.

The Rottweiler coat is short-to-medium length, dense and double-layered. The outer coat is straight, hard, and weather-resistant, while the undercoat is soft and interwoven, acting as protection against extreme temperatures.

Rottweilers are always black with defined markings ranging from rust to mahogany. The markings should always be found as follows:

The Rottweiler undercoat is grey, tan or black. On very rare occasions, long-haired Rottweilers can show up in purebred litters. As long hair is not accepted in the Rottweiler breed standard, they are immediately disqualified from conformation and are discouraged from being bred from. Long haired Rottweilers, however, are as good a pet and any Rottie.

Rottweilers are average shedders. You will regularly find dog hair on your clothes and furniture, particularly during Spring and Autumn/Fall, where they ‘blow’ their undercoats, shedding more than usual. To minimise the impact of shedding, groom every other day with a slicker brush to catch the hairs before they fall and keep your Rottweiler looking sharp. Up this when shedding becomes more intense.

While generally a healthy breed, German Shepherds are known to suffer from a few conditions, including:

Many diseases faced by Rottweilers are inherited and, therefore, avoidable. By choosing a good breeder, who conducts relevant screenings and health clearances, and only breeds physically and temperamentally sound Rotties, you are dramatically improving your chances of having a strong, happy, healthy Rottweiler of your own. What is it like to live with a Rottweiler?

Rottweilers can be mouthy, especially as puppies. Ensure your pup learns proper bite inhibition while young, as strangers and guests could easily misinterpret the mouthiness as aggression or an attempted bite.

Some Rottweilers purr! In addition, they’re known to produce a number of other non-barky vocals like grumbles, grunts, groans and moans.

While they appear to be serious, stoic sentries, Rottweilers crave attention from their loved ones. They are not suited to living alone outside.

Rottweilers remain and working breed can be highly destructive when understimulated. Daily physical and mental exercise and fair, consistent training is a must.

Unfortunately, some Rottweilers are prone to unwarranted aggression, and many Rotties are naturally territorial and protective. Seriously weigh the consequences of having a potentially dangerous pet, and whether are happy and able to safely managing one for 10-15+ years.

Furthermore, dog aggression is not uncommon in Rottweilers. In fact, it is specifically accepted in the breed standard as part of their temperament. Keep your Rottweiler under control at all times to prevent heartache, damage and lawsuits. They are not ideal dogs for first time owners, however one who is diligent and committed to raising one responsibly will be rewarded with a wonderful, devoted companion.

Overall, extensive socialisation and training, as well as good breeding from parents with solid temperaments is essential for a stable, well balanced Rottweiler.

Types of Rottweilers; What’s the difference between American and German Rottweilers

Despite the common use of terms like ‘American Rottweiler’ and ‘German Rottweiler’, the truth is that the only tangible difference is where they were born. The breed standards in each country are nearly identical, as the American Rottweiler Club (ARC)’s standard was based on that of the ADRK’s. Once you take a closer look at the breed standards, it’s clear to see that there is plenty of room for interpretation and variation. Different breeders select their dams and sires based on their own goals for the Rottweiler breed, and, as a result, some are taller, some are shorter, some are stocky, some are slimmer and so on.

That being said, breeding practices in Germany are far stricter. Rottweilers are required to pass a number of evaluations including conformation, health and temperament tests before they’re allowed to breed. The same policies are not enforced in the U.S., with many owners breeding indiscriminately.

One could argue that German-bred Rottweilers are more likely to represent the true Rottweiler, however, there are certainly American breeders who follow their own strict standards (or those of the ARDK) and breed superb Rottweilers themselves.

Below we’ve provided examples of German and American-bred Rottweilers to illustrate how varied Rotties can be even within bloodlines.

Buying a Rottweiler from a breeder

If you’d like to get a purebred Rottweiler as a puppy, be sure to look only at reputable breeders who care for the welfare of the puppies they breed. You can determine whether a breeder is reputable by observing whether they go through the effort of health testing their breeding stock for hereditary conditions like those above, and only breed dogs who are physically healthy, and emotionally sound. They should be involved in particular avenues with their dogs – be it conformation, protection sports, obedience, service, therapy, or any other activity that showcases their dogs’ temperament and suitability for work and breeding.

Often puppies from reputable breeders cost more money upfront due to the breeder’s high expenses. However, poorly bred dogs from breeders who do not conduct health screening can have hidden costs in the form of silent (at the time of purchase) health and mental conditions that should never have been allowed to be passed on. This can be dangerous, heartbreaking, and terribly expensive to deal with as an owner, on top of causing unnecessary suffering and a shortened lifespan for the dog. As one of the most popular breeds around, Rottweilers and Rottweiler-mixes are not hard to find in rescues and shelters. If you would like to adopt a Rottie in need of a new home, search for Rottweiler rescue organisations in your area. Alternatively, you could take a look pet-rehoming websites like Petfinder.