The Bulldog – he’s got a gruesome history, but this courageous dog shares little commonality with the brutal Bulldog of yore.

Bulldog history: What were Bulldogs originally bred for?

Bulldogs are suspected to have been developed around the 1200s from ancient Asian Mastiff-type breeds. These powerful dogs were revered for their protective abilities and effectiveness at bringing down large, dangerous animals.

In Great Britain, Bulldogs were used almost entirely for bull-baiting. This gruesome sport involved tethering an enraged bull and releasing a ferocious group of Bulldogs upon him. This was done entirely for human entertainment, with people placing wagers on which dog would be the first one to bring the hefty beast down. Bulldogs accomplished this by staying low to the ground, watching their opponent and waiting for the right moment to launch themselves at the bull’s face and grab his nose.

Fatalities were high for these dogs, with the raging bull trampling, flinging and impaling anything it came across. As a result, only the most courageous, tenacious (and sometimes luckiest!) Bulldogs lived to see another day. These highly revered fighters were readily bred from, spreading their genes and bringing in more cash for their owners. Bulldogs were fiercely loyal, but far from being the typical, gentle companion. In fact, they were largely considered a danger to society when not in the arena.

When bull-baiting was outlawed in 1835, Bulldogs lost their purpose and faced extinction. A handful of fanciers refused to lose their beloved fighters and endeavoured to pacify the ferocious Bulldog, in order to keep him from dying out. By breeding only the friendliest, softest-tempered Bulldogs in each litter, breeders were successfully able to revolutionise the once fearsome Bulldog, and mould him into the kind, patient, lovable companion you see today. 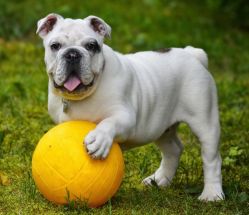 Bulldogs are a short, strong, medium-sized, breed of dog with wide shoulders, solid limbs, and a low swung body.

They tend to have loose skin, particularly around the neck and face, a smooth coat and a short tail, which can be straight or screwed. The Bulldog’s head is perhaps his most iconic feature. The AKC breed standard describes it as massive. Ideally, the skull’s circumference is equal to, or larger, than his full height at the shoulders.

Bulldogs are brachycephalic, which means that their faces are shorter, muzzles are flatter, and skulls are more compressed than most other breeds of dog.

While such a large, and curiously shaped head served an important purpose in his fighting days, Bulldog lovers around the world adore the look it gives this unique breed.

The Bulldog’s size – How big do English Bulldogs get?

Among their fanciers, Bulldogs are well-known for being kind, courageous and generally unflappable.

Bulldogs can be a challenge to train if they are not sufficiently motivated, but have an excellent memory. Fair, force-free methods of training such as positive reinforcement are heavily advised.

Bulldogs make excellent family dogs, showing tremendous patience and affection toward children. They have a high tolerance for pain due to their history as a successful fighter and are wonderfully dependable thanks to their cool, calm temperament. Keep in mind, however, supervision around children is always recommended, regardless of breed.

Bulldogs do not make great watchdogs due to their placid nature. Towards strangers, individual Bulldogs tend to range somewhere between completely aloof and hilariously social. Hostility towards non-threatening strangers should never be present, however.

Bulldogs are generally peaceful with other pets, including the family cat, but it’s not unheard of for males to exhibit aggression towards other dogs, particularly those of the same sex.

Bulldogs are a relaxed breed who have low to moderate exercise requirements. A daily walk is recommended, in order to keep them healthy and moving.

Due to their brachycephalic skulls, Bulldogs can have trouble breathing and regulating body temperature in particularly hot or cold weather. They are especially susceptible to heat stroke, so utmost care should be taken on hot days. Bulldogs come in a number of recognised colours, including reds, whites, fawns, fallows and any combination of the above, including brindling and piebald.

The coat itself is short and smooth, while the skin is loose over a muscular frame.

Bulldogs are moderate shedders, which means you will often find hairs on your clothes and furniture. Groom your Bulldog regularly to minimise the impact of shedding.

Groom once or twice per week with a rubber brush or hound glove to remove dead hairs and skin cells and keep your Bulldog looking sharp.

Bulldogs skin folds should be wiped through daily and then dried to prevent infection and skin irritations.

Sadly, Bulldogs are not an especially healthy breed overall. They are commonly plagued by a number of conditions, including:

Many diseases faced by Bulldogs are inherited, and therefore avoidable. By choosing a breeder who conducts relevant screenings and health clearances, and only breeds physically and temperamentally sound Bulldogs, you are dramatically improving your chances of having a strong, happy, healthy Bulldog of your own.

On average, Bulldogs live 6-8 years. This is very low in comparison to other breeds in its weight range. However, if well-bred and cared for, it’s not unheard of for Bulldogs to live more than 10 years.

What is it like to live with an English Bulldog?

Bulldogs commonly demonstrate a number of quirky traits, including wheezing, snoring, flatulence and slobber, as well as an assortment of snorts, grumbles and grunts.

Do not underestimate ongoing vet costs of owning an English Bulldog, even one who is well bred. Allergies, skin irritations, soft palette trimming are common place though this can be minimised with daily upkeep such as cleaning and wiping skin folds dry each day. In addition, many owners find the average dog food will not cut it for their Bulldogs and find themselves having to pay extra for premium kibble or opting to prepare their dog’s meals on their own to ensure any particularly aggrevating ingredients are excluded.

Energy levels can vary from individual to individual. Some English Bulldogs are known to sleep for most of the day, while others can be very playful. For overall health and well being, it is recommended that you provide some form of daily activity to your Bulldog though be careful about overexercising and overheating due to their head shape.

The following Bulldogs are actually considered completely different breeds from the English Bulldog, and each other, however, there tends to be confusion between which Bulldog is which.

Developed in the United States in the 1800s, the American Bulldog was bred from Old English Bulldogs who had been brought over by working class immigrants. American Bulldogs are large, powerful, athletic and active with a smooth, low maintenance coat. They are generally healthy, free from may of the problems faced by the English Bulldog, and can live for 15+ years. They are often more assertive than their English cousins and do best with experienced owners. Developed in the 1800s from Old English Bulldogs, French terriers, and Pugs, the French Bulldog is a highly popular brachycephalic breed of dog. Affectionately referred to as Frenchies, French Bulldogs are a small breed with large erect ears, dark eyes and a short low maintenance coat. As they were originally bred to be companions, French Bulldogs are calm, affectionate, patient and clownish. They adore their families and make excellent apartment dogs due to their low exercise needs and infrequent barking. Unfortunately, French Bulldogs suffer from many of the same health conditions as their English counterpart and only live 8-10 years on average. Despite what the name suggests, the Olde English Bulldogge (different from its ancestor, the Old English Bulldog) is a modern breed of dog, developed in the U.S in the 1970s in an attempt to recreate the original bull-baiting Bulldog, without the aggressive disposition. The Olde English Bulldogge owes its ancestry to English Bulldogs, American Pit Bull Terriers, American Bulldogs and Bull Mastiffs. This combination of dog breeds is intended to produce a healthier, more athletic and better-proportioned Bulldog. Breeders are working hard to continue improving the health, heat tolerance and breathing capabilities in each successive litter. Buying a Bulldog from a breeder

If you’d like to get a purebred Bulldog as a puppy, be sure to look only at reputable breeders who care for the welfare of their puppies. You can determine whether a breeder is reputable by observing whether they go through the effort of health testing their breeding stock for hereditary conditions like those mentioned above, and only breed dogs who are physically healthy, and emotionally sound. They should also be involved in relevant avenues with their dogs – be it conformation, obedience, or any other dog sport that showcases their dogs’ temperament and suitability for work and breeding.

Often puppies from reputable breeders cost more money upfront due to the breeder’s high expenses, and Bulldogs are no exception. However, poorly bred dogs from breeders who do not conduct health screening can have hidden costs in the form of silent (at the time of purchase) conditions that should never have been allowed to be passed on. This can be heartbreaking, and terribly expensive to deal with as an owner, on top of causing unnecessary suffering and a shortened lifespan for the dog.

As one of the more popular breeds around, Bulldogs are not hard to find in rescues and shelters. If you would like to adopt a Bulldog in need of a new home, search for Bulldog rescue organisations in your area. Alternatively, you could take a look at pet-rehoming websites like Petfinder.