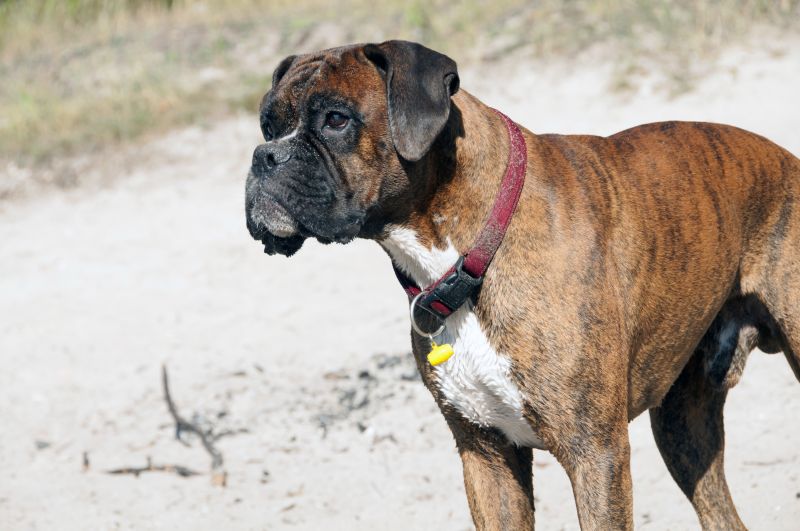 The bouncy Boxer – a dog with a sense of humour. He loves to play and clown around. Just don’t mess with his family!

Boxer history: What were Boxers originally bred for?

While only formally developed in the late 19th century, it is generally accept that today’s lovable Boxer owes its creation to the Bullenbeisser, a now extinct hunting dog, bred to strategically tackle and hold game while their human hunting partner made their way over. By breeding Bullenbeissers with a more compact, active mastiff, a smaller Bullenbeissers began to emerge.

Over time, these smaller Bullenbeissers found themselves as family and guard dogs, protecting the homes of their owners. It didn’t take long for dog fanciers to fall for the intelligence and trainability of these loyal canines, because the breed was soon stabilised. By 1904 an official breed standard was written.

Boxers served as military dogs in the early 20th century, carrying messages and packs, and even acting as attack and guard dogs when the situation called for it. After the end of World War II, Boxer popularity skyrocketed, with many soldiers bringing their loyal canines home from the battlefield. Boxers are a well-muscled, medium-sized, square breed of working dog with a short back, powerful limbs and smooth, tight coat.

Boxers are brachycephalic which means that their faces are shorter, muzzles are flatter, and their skulls are more compressed than most other breeds of dog.

The Boxer temperament is iconic. They are well-known for being fun-loving, self-assured, playful, empathetic and expressive. They can be slow to mature, and remain upbeat well into their golden years.

Boxers are an intelligent breed, but can be slower to train if they are not sufficiently motivated. Generally considered to be sensitive dogs, fair, force-free methods of training such as positive reinforcement are heavily advised.

Boxers make excellent family dogs, showing tremendous patience and tolerance for children. Young Boxers can be boisterous, and may accidentally knock over young toddlers however. Supervision around children is always recommended, regardless of breed. Boxers are naturally protective of their loved ones, and need no special training to excel as guardians.

They also make great watchdogs, thanks to their naturally alert dispositions. Hostility towards non-threatening strangers should not be present however. Boxers generally get along well with other pets, including the family cat, but it’s not uncommon for them to exhibit aggression towards other dogs, particularly those of the same sex. 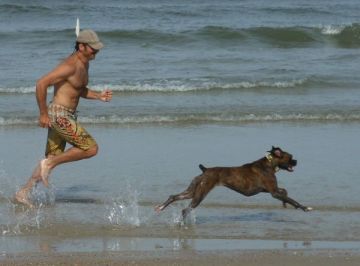 Boxers are an energetic breed, known to play hard. They love being on the move, and require vigorous daily exercise. A brisk walk of an hour or more per day is recommended for adults, as well as plenty of play and mental stimulation in between. More may be needed for younger adults, as they’re known to be hyper. Hard exercise should be avoided in very young boxers until they have finished growing.

Without enough physical and mental exercise, Boxers find their own ways to amuse themselves, usually taking it out on your garden and household furniture.

Due to their brachycephalic skulls, Boxers can have trouble breathing and regulating body temperature in particularly hot or cold weather. Boxers are especially susceptible to heatstroke. Boxers come in two recognised colours – fawn and brindle, both of which may be present with or without white markings.

Predominantly white Boxers do exist, however they are not considered acceptable in many national kennel clubs’ breed standards, including the AKC. There is no such thing as a black Boxer however. Boxers that appear black are merely exhibiting an extensive brindle pattern.

The coat itself is short and smooth, and skin is taut over an athletic frame.

The Boxer’s smooth coat is low maintenance, requiring little grooming outside of a weekly rub-down with a bristle or rubber brush to remove dead hair and skin cells.

Avoid bathing too often with harsh shampoos. Opt for gentle, dog-specific shampoos instead, to preserve natural protective oils on the skin. Wipe down with a cloth as needed to easily remove dirt.

Regularly inspect and care for ears, nails and teeth as needed, as well as the wrinkles on their face for signs of build-up or infection.

Sadly, Boxers are not an especially healthy breed overall. They are commonly plagued by a number of conditions, including:

Many diseases faced by Boxers are inherited, and therefore avoidable. By choosing a breeder who conducts relevant screenings and health clearances, and only breeds physically and temperamentally sound Boxers, you are dramatically improving your chances of having a strong, happy, healthy Boxer of your own.

On average, Boxers live 9-12 years. However, if well-bred and cared for, it’s not unheard of for Boxers to live up to 15 years old.

What is it like to live with a Boxer?

Boxers commonly demonstrate a number of quirky traits, including wheezing, snoring, flatulence and slobber, as well as an assortment of snorts, grumbles and grunts.

Do not underestimate the exercise requirements of a Boxer. They can require upwards of one to two hours of physical activity daily even into their golden years. With regular exercise, they can still be active and busy in the house, making them a great friend for children and teens, though perhaps a bit too exuberant for young toddlers.

Same-sex aggression is not uncommon in the breed, particularly amongst females though this can be highly dependent on breeding lines.

Take care is especially cool or warm weather. Boxers have only a single coat and are prone to overheating due to their brachycephalic skull. Keep them in the shade when outdoors in summer and avoid activity during peak heat.

Overall, many Boxer owners believe the breed to be delightful companions who are easy to keep when properly managed and trained.

All of the above mentioned Boxers fall under the Boxer breed. However, some breed standards have emphasis on different points of the Boxer’s physical appearance. As a result, there are minor differences in how a Boxer from each bloodline may appear.

English Boxers often have richer hues in their coats, as well as finer bone structure. Their appearance is considered to be more elegant.

German Boxers tend to have heavier bone structure than both American and English Boxers.

The American Boxer tends to have tighter skin and wider muzzles.

Bloodlines from all three countries can be found in any given Boxer, depending on the breeder’s goals. Anecdotally, owners claim that German and English Boxers have more drive and focus than their goofier, American counterpart. However, this is largely hearsay, and you can expect all three to have typical Boxer traits.

Why are Boxers called Boxers?

There are a number theories as to where the Boxer originally got its name from, as there doesn’t appear to be one clear answer. The most prevailing ones are mentioned below.

The first suggestion comes from the word ‘boxl’, originally used to refer to the handy butcher’s dog, an ancestor of today’s Boxer, who would fearlessly bite into out-of-control livestock and drive them back into the slaughterhouse.

The second, and perhaps more relatable, theory connects the breed’s name with their natural tendency to paw and ‘box’ while they play and investigate novel objects. If you’d like to get a purebred Boxer as a puppy, be sure to look only at reputable breeders who care for the welfare of their puppies. You can determine whether a breeder is reputable by observing whether they go through the effort of health testing their breeding stock for hereditary conditions like those above, and only breed dogs who are physically healthy, and emotionally sound. They should also be involved in particular avenues with their dogs – be it conformation, IPO, obedience, or any other dog sport that showcases their dogs’ temperament and suitability for work and breeding.

Often puppies from reputable breeders cost more money upfront due to the breeder’s high expenses. However, poorly bred dogs from breeders who do not conduct health screening can have hidden costs in the form of silent (at the time of purchase) conditions that should never have been allowed to be passed on. This can be heartbreaking, and terribly expensive to deal with as an owner, on top of causing unnecessary suffering and a shortened lifespan for the dog.

As one of the more popular breeds around, Boxers are not hard to find in rescues and shelters. If you would like to adopt a Boxer in need of a new home, search for Boxer rescue organisations in your area. Alternatively, you could take a look on pet-rehoming websites like Petfinder.